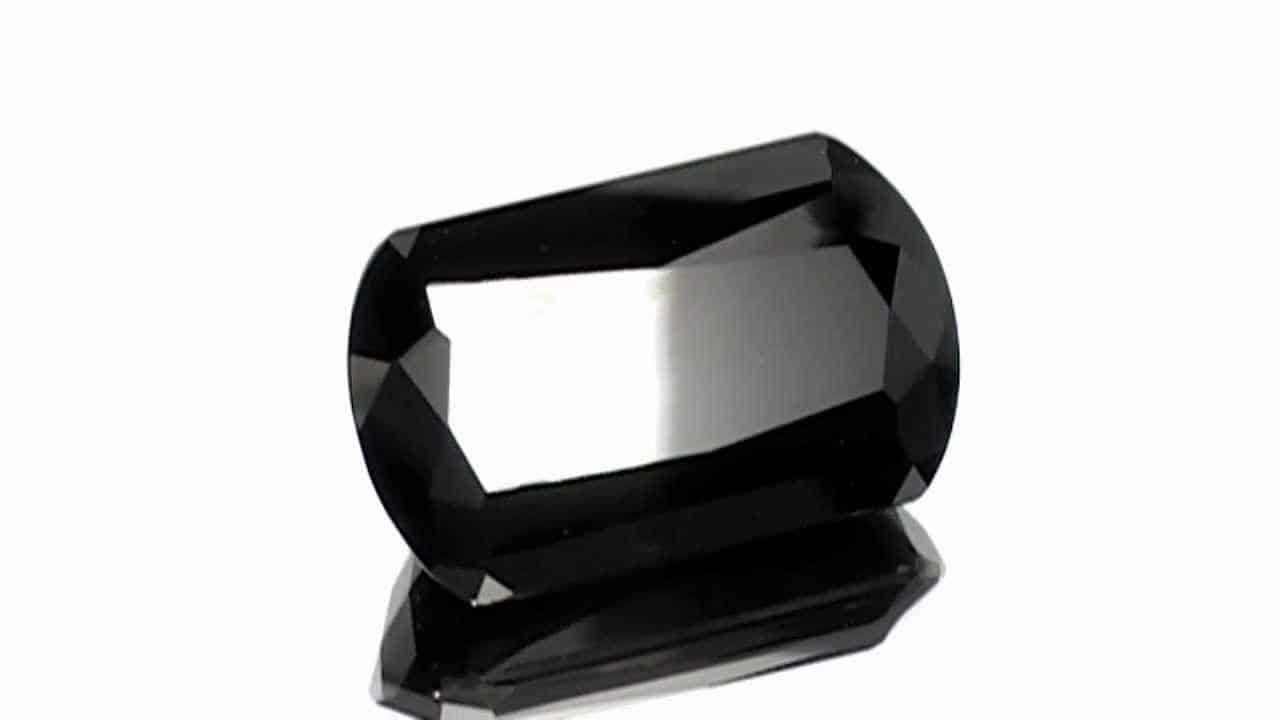 Gemstones have always been about fancy colors, brilliance, and sparkle. But not anymore. The newfound fame of black gemstones has revolutionized both the fashion world and gem trade alike. It is time to dig deep and learn everything there’s to know about black gemstones. If you are looking to learn more, this is the complete fact guide you need on the top 6 black gemstones.

Not so long ago there was a time when black gemstones were just thrown away. The color, brilliance, and sparkle were the names of the trade. On top, the black was considered a color most associated with mourning and gothic stereotypes. But today some of the varieties of black gemstones are sold at thousands of dollars per carat.

The trend settlers of fashion industry has brought about a paradigm shift of the perspective towards black gemstones. They now essentially represent modernity, elegance and character confidence when worn along with matching outfits. Black stone embedded jewelry are gender neural too, making them one of a kind candidate for many who love to wear black.

Is black diamond a real stone? Simple answer is yes, they are real. Formed is the same way as the colored diamonds, these are made through a timespan of millions of years. The level of inclusions in these stones are quite high compared to the normal diamonds. These inclusions are predominantly made of traces graphite and amorphous carbon which gives it the color.

A treated diamond however will cost less than 500 US dollars per carat. Treated black diamonds are usually made using a lower quality colorless diamond as the base material and turning them into black through radiation treatments. These will look almost similar to their natural counterpart but will be less opaque.

The natural black diamond does not really have a color grading system as they look completely opaque, neither they have a clarity rating like colorless diamonds have. Black diamonds can be found in various cuts, where the standard brilliant cut is the most prominent. The usual expectations of a diamond; the sparkle and brilliance are absent in black diamonds. Black diamonds also tend to be heavier due to its dense inclusions so naturally, you will find a smaller stone is of higher carat weight than a similar colorless diamond.

Since a black diamond symbolizes a happy marriage, it is quite popular as a wedding ring stone especially in recent times that help grew the demand and the dollar value. It is also gender-neutral as many black gemstones, thus worn by many men on their wrist bands too. Some choose to invest in black diamonds which has actually proven to be a good ROI due to its newfound and rising fame.

Sapphires are found in all sorts of colors and intensities including black. However, it is necessary to note that black sapphire may not be completely black even they may look black. The usual black sapphires may very well be very dark blue or grey that it appears black to the naked eye. Belonging to the same corundum family, it exhibits the same physical properties scoring a 9 on the Mohs scale, making it a tough stone suitable for everyday wear.

The more famous type of black sapphire is the black star sapphire. Star sapphires display the asterism due to its dense needle-like inclusions which are also known as silk. These inclusions reflect light when cut into cabochon shape making a magnificent six ray or sometimes twelve ray star.

Black sapphires have also got traction during the last five to ten years and now valued at considerably higher prices than they used to be. A natural black sapphire cost around 50 – 150 dollars per carat while a black star sapphire may be priced a little more. The treated varieties will be less expensive.

There is an ample number of ways black sapphires said to be helpful in spiritual means. Black sapphires are believed to be especially helpful in managing stress and fear. It said to assist in decision-making in demanding situations. Black sapphires are also used as a wedding ring stone alternating the black diamonds due to its cheaper price point. This could be a good choice if you are particularly looking for a fair valued black colored stone for everyday wear.

Spinel is the next hardest material on the Mohs scale after sapphire. Scoring an 8, spinel can be very hard thus suitable for jewelry. Black spinel is an especial stone out of this list, cause even though it will look black from outer appearance under diffused light, when hit with directional light, these could exhibit the real color underneath like purple, indigo, red or blue. This makes the black spinel one of a kind stone.

Black spinels are found like water-worn black pebbles, difficult to differentiate from just any other water-worn black stone. It needs to be inspected with directional light or behind the sun to identify accurately. Most commonly found in Sri Lanka and Burma, these were historically sold very cheap, but now have gained significant market demand.

One carat of black spinel may cost USD 50 – 100 dollars. This makes it also a cheaper option compared to both black diamonds and black sapphires. Black spinel are found in the same mines as the sapphire mines therefore historically mixed up inaccurately as sapphires when it comes to fine colors. It is amazing to note that some of the notable rubies were later found to be actually red spinel. Spinel in general however has still not received its due recognition in the international gemstone market.

Shares the same material properties as standard spinel that usually comes in blues, pink, purple, and indigo. It makes black spinel a fine stone for regular wear jewelry. Wearing a black spinel said to have spiritual benefits related to a happy marriage, prosperity in business, and as a source of energy.

Tourmaline in general broke into the spotlight in 1876 when George Kunz sold a green tourmaline to Tiffany and Co. Since then the tourmaline became a recognized gemstone for jewelry. Rightly so due to a multitude of lovely colors, it comes in. Most famous are the shapes of red and pink also know as Rubellite tourmaline, intense green known as chrome tourmaline, unique greenish-blue Paraiba tourmaline, and finally the magnificent watermelon tourmaline.

Black tourmaline on the other hand is more famous for its known ability of cleansing energy. At times black tourmalines are said to be a must have stone in any home or workplace. This is due to the strong belief that the bad negative thoughts and negative energy are negated by the presence of the stone or the pure crystal itself. It is further believed that absorbing negative energy will not reduce the effectiveness of the stone.

Similar to the colored tourmaline has its own unique identifiers, black tourmaline is known as either Schorl or Dravite. These are named after where they were first found in Germany and Slovenia-Austria border respectively. The naturally found tourmaline is said to be 95% black thus these are readily available in the market.

One carat of black tourmaline is priced between 10 – 50 dollars. Black tourmaline is usually found with some level of inclusions therefore a pitch-black stone will cost a little more, but still extremely affordable compared to the black gemstones described earlier. With its popular spiritual beliefs, black tourmaline is an excellent stone for jewelry. It scores 7 – 7.5 on the Mohs scale making it fairly a strong gemstone for regular wear, but not so much as sapphires or spinel.

The name garnet is always synonymous with intense red color in the form which they are frequently found. Garnets are found in many other colors apart from red, but they are lesser-known. Black garnet however is the rarest stone out of the lot, also known as Andradite.

Garnets unlike sapphires are singly reflective, therefore tend to have an even color spread throughout the stone. This gives black garnet a distinct opaque, glossy look that reflects the light to a greater degree. Therefore the black garnets are a fitting stone for jewelry making. One carat of black garnet can be found in the market for 25 – 100 US dollars, but now becoming increasingly rare.

Garnet in general has a hardness score of 6.5 – 7.5 on the Mohs scale. It may not be as hard as some of the black gemstones described earlier, but has a great potential for regular wear with a certain level of caution. Garnets are also used for industrial uses as an abrasive and for water filtration.

As with all black gemstones, garnets too have attributed metaphysical beliefs. Black garnets are said to be effective to generate creativity and confidence, thus enabling the wearer to advance in his or her life rapidly. Garnet is also the January birthstone.

The name onyx is coming from an ancient Greek word that is synonymous with ‘nail of a finger or claw’. According to the ancient myth, the black onyx is the fingernails of the goddess Venus that fell on to the earth. True to the legend, the onyx is characterized by the alternating color bands that look exactly like a decorated fingernail.

The alternating color bands are naturally made out of foreign minerals like silica, moganite, and quartz. Black onyx is usually found with white or light color stripes. Black onyx is widely used for jewelry. You can also find round thin cut black onyx with color bands on expensive watches as its watch dial.

Natural onyx is found in many countries including India, Germany, Australia, Madagascar, Argentina, and Canada. However, most of the black onyx in the market are either synthetic or treated. One carat of onyx sells around 25 – 100 US dollars and the synthetic and treated varieties go for much less than that.

Onyx has been able to secure a popular marketable name for the last many years, making it a ‘go-to’ stone by black gemstones lovers. Some of the more rigid and sometimes expensive stones are sold as black onyx for the purpose of selling them faster. Whenever the color bands are absent, black onyx is a difficult stone to differentiate and identify by an untrained eye.